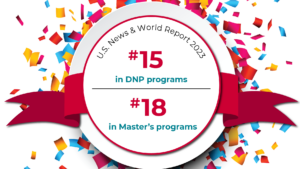 Rutgers School of Nursing once again has been ranked among the nation’s top 20 schools for its graduate programs by U.S. News & World Report.

“This recognition acknowledges our school’s commitment to demonstrating our ‘Excellence in Action’ theme across all of our mission areas–research, education, and health promotion,” said Linda Flynn (PhD, RN, FAAN), professor and dean of Rutgers School of Nursing. “Thank you to our faculty, staff, students, and alumni. They are truly among the best of the best.”

In addition to its top 20 ranking for graduate programs, Rutgers School of Nursing holds an elite ranking for its bachelor’s degree programs, placed in the nation’s top 5 percent and ranked No. 31 out of 694 programs.