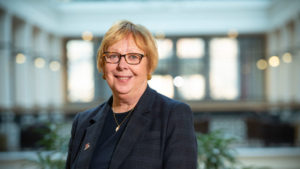 Linda Flynn, PhD, RN, FAAN, has been appointed dean of the Rutgers School of Nursing following a national search. Flynn now permanently takes the helm of the largest and most comprehensive nursing school in New Jersey, and one of the largest Doctor of Nursing Practice programs in the country.

Flynn served as interim dean prior to her appointment starting Sept. 1, 2019, and is a tenured professor and former senior associate dean of nursing science at Rutgers School of Nursing.

“I am excited and extremely honored to accept the appointment as dean of the Rutgers School of Nursing,” Flynn said. “I am committed to serving as dean and working diligently to move our mission forward.”

Flynn’s extensive academic leadership experience includes serving in senior positions in schools of nursing including Rutgers, as well as the University of Colorado, where she was associate dean of academic programs, responsible for all academic nursing divisions and degree programs from pre-licensure through doctoral and PhD.

In addition to her academic leadership roles, Flynn’s research into the effects of system factors’ impact on patient outcomes has shaped federal policy. Her most recent efforts have extended this work to include veterans’ health. Flynn is the co-editor of the textbook, “Nursing Policy Research: Turning Evidence-Based Research into Health Policy.” She was inducted as a Fellow in the American Academy of Nursing in 2009, is a Fellow of the New York Academy of Medicine, and is currently an honorary Senior Fellow at the Center for Health Outcomes and Policy Research, University of Pennsylvania.

With over 1,700 graduate and undergraduate students, and 12,800 alumni, the Rutgers School of Nursing, located in Newark, New Brunswick, and Blackwood, New Jersey, has seen tremendous growth in its size, national reputation, clinical enterprise, and body of research over the past few years. The school is ranked among the top ten percent of nursing schools nationwide and boasts two programs included in this year’s US News and World Report’s list of best graduate programs in the country: Doctor of Nursing Practice at #14 and the Master of Science in Nursing program at #17.