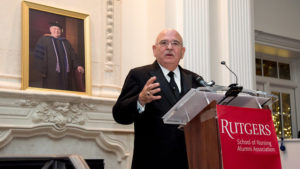 Accompanied by a rousing, standing ovation from more than 300 guests, William L. Holzemer (PhD, RN, FAAN), stepped to the stage and was recognized for his recent retirement following 10 years as dean of Rutgers School of Nursing.

Holzemer, along with distinguished alumni Judith Persichilli, acting New Jersey commissioner of health; and Kristy Agresta, a school nurse; were among the honorees at the annual Alumni Scholarship & Awards Gala hosted by Rutgers School of Nursing Alumni Association on November 7 at Nanina’s in the Park in Belleville.

Holzemer, who served as dean from September 2009 to August 2019, received the Alumni President’s Award for his extraordinary support of the alumni association. He was also lauded for his contributions to advancing nursing education in the U.S. and abroad, and his trailblazing leadership in prevention, care, research, and policy making related to HIV/AIDS.

Kristy Agresta (BSN, RN, CSN-NJ), a certified school nurse with the Ridgefield Public Schools, received the 2019 Rising Star Alumni Award. A 2013 graduate of the BS in Nursing degree program at Rutgers School of Nursing, Agresta is a published author and a member of the New Jersey School Nurse Advisory Council. She secured a grant that enabled her school district to purchase an automatic external defibrillator (AED), and a pharmaceutical gift of $90,000 worth of Naloxone to help schools treat narcotic overdose in emergency situations.

Following an unveiling of a new portrait of Holzemer, to be installed in the nursing school’s “Deans’ Lounge” at Ackerson Hall, Newark, and a showing of a congratulatory video, officials presented remarks.

As an internationally recognized expert and researcher in academic nursing and HIV/AIDS care, fellow of prestigious national and international academies, and global influencer, Holzemer was a major recruitment to Rutgers, said Brian L. Strom (MD, MPH).

Strom, the executive vice president for health affairs at Rutgers University and chancellor of Rutgers Biomedical and Health Sciences (RBHS), which includes the School of Nursing, congratulated all of the evening’s honorees.

He also noted that donations to nursing scholarships, made through the end of this year, are being matched via the 2019 RBHS Chancellor’s Scholarship Challenge.

“However,” Strom continued, “what truly distinguishes Bill are his passion and compassion.”

Holzemer is passionate about advancing nursing science, education, and the profession at large, said Strom.

“But it is his compassion for alleviating the suffering of patients, especially those that are the most vulnerable and at the margins of society, which really distinguishes Bill as a human being. We are grateful for Bill’s time here at Rutgers as dean and wish him continued success.”

“All of the top-tier schools were falling over themselves trying to recruit Bill Holzemer, the internationally renowned researcher. He could have gone anywhere that he wanted to go. . . Bill Holzemer chose Rutgers,” she said.

“Thank you for choosing us,” she added. “The personal and collective growth that you fostered among us, and pride that we felt working for you will always be ours. Thank you. It’s been a privilege.”

“It is my extreme pleasure to recognize Dr. William Holzemer for his contributions to the welfare and improvement of the Rutgers School of Nursing Alumni Association,” said Marra.

“Our event tonight has now become our best yet, with over 300 attendees. The members of the board recognize that the success of each of the annual galas would not have been possible without the support of Dean Holzemer,” Marra continued.

Holzemer was an active supporter of the board, she noted. He regularly attended meetings and special events and provided “thoughtful, and sometimes provocative, out-of-the-box thinking to strengthen the alumni association.”

On accepting the Alumni President’s Award, Holzemer noted, “let me say one of the big challenges was the merger of our two schools and the two alumni associations. We’ve built now a 12,000-member alumni association. Five years since the merger, we’ve become quite unified, which bodes well for the future.”

As each speaker noted, raising funds for student scholarships is a major goal of the Rutgers School of Nursing Alumni Association. This year, the following scholarships were presented:

Rutgers School of Nursing Alumni Association wishes to thank the following individuals and organizations that financially supported the event as sponsors: