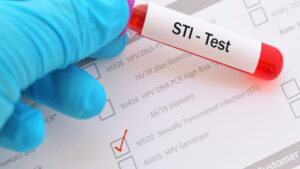 The 1,348 participants in the study, published in AIDS Patient Care and STDs, completed 2,203 tablet-based ACASI sexual history surveys leading to 531 participants receiving STI testing related to reported risk behaviors. Those tests identified 255 cases of gonorrhea, chlamydia, or syphilis, most of which (86 percent) would have otherwise gone undetected for lack of symptoms since most clinics test only after annual screenings or when patients are symptomatic.

“It’s important to identify and treat these infections because they can have severe long-term consequences such as infertility, blindness, and chronic pain, but we’ve struggled to routinely screen and test at-risk persons nationally,” said John A. Nelson (PhD, CNS, CPNP), lead author of the study and the director of national training at the School of Nursing François-Xavier Bagnoud Center in Newark. The study was supported by a $12.5 million cooperative agreement award from the Health Resources and Services Administration (HRSA) of the U.S. Department of Health and Human Services.