Rutgers School of Nursing receives $12.5 million to improve STI testing and treatment among people living with or at risk for HIV 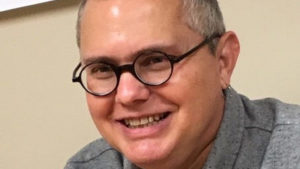 In the United States, sexually transmitted infections (STIs) are sharply on the rise. A record-breaking 2.3 million cases of syphilis, gonorrhea, and chlamydia were diagnosed in 2017, reports the Centers for Disease Control and Prevention (CDC). Syphilis cases increased by 76 percent and gonorrhea cases rose by 67 percent from 2013 to 2017. Aiming to help reverse this trend, a new Rutgers-led, federally funded project is working to improve STI screening and treatment practices in some of the nation’s hardest hit locales, especially among people living with or at risk for HIV.

“Common STIs are not only a major health concern on their own, they are also known to increase the risk of both transmitting and acquiring HIV,” says Rutgers HIV expert John Nelson (PhD, CNS, CPNP), principal investigator for the new $12.5 million initiative.

“Despite national recommendations, routine STI testing and prevention are often lacking in primary care for people living with HIV,” Nelson explains. “Now, with the ongoing opioid epidemic, risky behaviors associated with substance use, development of antibiotic-resistant gonorrhea, and decreased condom use by high-risk individuals, we’re facing a perfect storm related to the spread of common STIs.”

Clinical Demonstration Sites in Washington, DC; Louisiana; and Florida
The FXB Center project will work with nine clinical sites–three each in Washington DC, Louisiana, and Florida– to implement HRSA-designated interventions to help increase adherence with CDC recommendations for screening, diagnosing, and treating STIs. Howard University, Louisiana State University, and the University of Florida are collaborators on the project.

The three locales were selected based on their extraordinarily high rates of STI cases and new HIV diagnoses. For example, as reported by the CDC in 2016, the District of Columbia had the nation’s highest rates of chlamydia, gonorrhea and syphilis. It also has the highest HIV incidence and prevalence in the country.

The nine clinical demonstration sites are health centers funded by the Ryan White HIV/AIDS Program, with some also supported by the Bureau of Primary Health Care. Situated in both urban and rural locations, they serve patient populations, including adolescents and young adults, that have higher than average STI rates nationally.

Barriers to STI Screening and Care
The CDC has developed guidelines for routine STI screening, diagnosis, and treatment and there are also federal recommendations on how to improve practice in these areas. Yet, there are multiple challenges to their implementation.

Known barriers include payment for lab tests and treatment, and labs that may not be able to process certain screening tests. Also, health providers may have limited knowledge of the guidelines, or may lack the training and the comfort-level to conduct needed sexual health histories in a culturally sensitive manner.”  And, all of this takes time,” Nelson explains. “With few providers and more patients, routine STI screening of asymptomatic patients can be easy to neglect.”

Putting Best Practices to Use on a Broader Scale
For most of these barriers, evidence-based interventions already exist. The challenge is to put the most appropriate ones into regular use where they will achieve the best results.

Through ongoing capacity-building activities and technical assistance, Nelson and FXB Center colleagues will guide implementation and evaluation of such interventions at the nine clinical sites. They’ll develop educational materials, create communication networks, and convene annual meetings of the project partners. Based on the most successful and cost-effective interventions identified, the project will conclude with publication of a toolkit for national use.

“As we face this public health crisis of rising STI rates, it’s critical that we improve our nation’s ability to provide routine STI screening and appropriate care in a non-judgmental way to all people,” Nelson says. “Our healthcare system must recognize the importance of sexuality, sexual behavioral, and sexual health, and integrate these aspects of our lives into primary care throughout the lifespan.”

HRSA Acknowledgement
Improving Sexually Transmitted Infection Screening and Treatment among People Living with or at Risk for HIV, a cooperative agreement (grant #U90HA32147) is supported by the Health Resources and Services Administration (HRSA) of the U.S. Department of Health and Human Services (HHS) as part of an award totaling $12,417,717 with 0 percent financed with non-governmental sources. The contents here are those of the author(s) and do not necessarily represent the official views of, nor an endorsement, by HRSA, HHS, or the U.S. Government. For more information, please visit HRSA.gov.