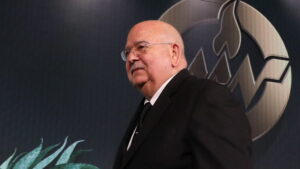 William L. Holzemer (PhD, RN, FAAN), Distinguished Professor and dean emeritus at Rutgers University School of Nursing, was inducted as a 2022 Living Legend by the American Academy of Nursing during its annual policy conference held October 27-29 at the Marriot Marquis Hotel in Washington, D.C. Only six nurses from across the nation received this year’s Living Legends Award, considered by many to be the highest honor in the nursing profession.

With more approximately 2.900 members, known as fellows, the Academy serves the public and the nursing profession by advancing health policy through organizational excellence and effective nursing leadership. Fellows are among nursing’s most accomplished leaders in education, management, practice, and research. Annually, the Academy recognizes a small group of fellows as Living Legends in honor of their extraordinary contributions to the nursing profession and society, and their impact on health and well-being in the United States and across the globe.

In addition to his role at Rutgers, Holzemer is a professor emeritus at the University of California San Francisco School of Nursing (USCF SON) and a Distinguished Honorary Professor at St. Luke’s University in Tokyo. He also serves as the editor-in-chief of the Japan Journal of Nursing Science. Holzemer has been an active advocate and researcher most recently focused on improving the quality of life for people and families living with HIV/AIDS, with an aim to eliminate health disparities for patients challenged by stigma, symptom management, and medication adherence.

Holzemer served 10 years as dean of nursing at Rutgers (September 2009-August 2019), where he led the merger of two nursing schools following the historic transfer of most schools and units of the former University of Medicine and Dentistry of New Jersey to Rutgers. He implemented a unique academic divisional structure at Rutgers School of Nursing and saw the school climb to the top 20 in national rankings by U.S. News & World Report.

An active nurse leader and researcher for over five decades, receiving his first R01 grant in 1978 to study nurse practitioner clinical decision-making, Holzemer has extensive experience as a nurse scientist and his work, particularly in HIV/AIDS, has made an international impact.

He founded the International Nursing Network for HIV/AIDS Research in 1996, focused on conducting and disseminating nursing research to help people live well with HIV. From 2000-2004, he coordinated a project with nurse faculty from Botswana, Lesotho, South Africa, and Swaziland on self-symptom management for people with HIV/AIDS. From 2002-2007, he co-directed the Nursing Research Center on HIV/AIDS Health Disparities (P20), linking faculty in HIV research from the University of Puerto Rico and UCSF SON.

From 2004-2009, he led a five-year R01 study examining the role of stigma and discrimination on the quality of life for persons living with HIV/AIDS and on the quality of work life for nurses caring for HIV/AIDS patients in Lesotho, Malawi, South Africa, Swaziland, and Tanzania. As a dedicated mentor and research advocate, Holzemer directed a T32 grant which supported pre-doctoral and post-doctoral fellows at UCSF SON for 13 years.

Holzemer served on the Agency for Healthcare Research and Quality’s first HIV guideline panel, Evaluation & Treatment of Early HIV Infection, and two National Academy of Medicine committees, including Measuring What Matters: Allocation, Planning, Quality Assessment for the Ryan White Care Act and The Science of Changing Behavioral Health Norms. He served from 2004 to 2007 as a member and chair of the care sub-panel that evaluated the President’s Emergency Plan for AIDS Relief (PEPFAR), which the U.S. Department of State manages.

In 2012, he received The Order of the Rising Sun, Gold Rays from the Japanese government for contributions to the development of academic nursing in Japan. He has served on several governing councils, including for CGFNS Inc., and is a past president of the American Nurses Foundation. Additionally, Holzemer has served as an external reviewer for agencies such as the Finnish Academy and the African Nursing Honor Society. He earned his PhD from Syracuse University, MS from Miami University Ohio, Bachelor’s in Psychology from the University of Washington, and BSN from San Francisco State University.