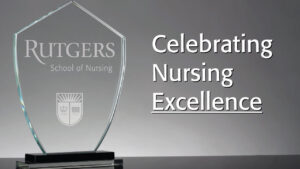 Rutgers nursing alumni are the backbone of their communities and leaders in their fields. This year, the Rutgers University School of Nursing Alumni Association (RSONAA) celebrates distinguished Rutgers alumni for their exceptional achievements.

Charles Vannoy, a senior hospital executive at Valley Health System, is the recipient of the 2022 Outstanding Alumni Award. Marika Haranis of Inova Health System, an emerging leader in palliative care, was selected to receive the 2022 Rising Star Alumni Award. These Rutgers nursing graduates are shaping the future for generations to come.

This year, the association presents the inaugural Dean’s Award for Lifetime Achievement to legendary nurse leaders Dula Pacquiao and Beverly Whipple, both professors emerita at Rutgers School of Nursing and graduates of Rutgers University.

The RSONAA will host a reception to recognize these phenomenal nurses and this year’s student scholarship recipients. Honorees and the nursing students will be featured in the 2022 Alumni Scholarships and Awards Virtual Gala presentation, launching May 5 at 7 p.m. with a virtual toast to be held via Facebook Live. All donations from the gala will be converted directly into scholarship funds for current undergraduate and graduate-level students.

As many School of Nursing students are facing major economic challenges, the RSONAA has set a lofty goal this year to raise $10,000 in scholarship funds for Rutgers nurses of tomorrow. The association is suggesting a donation of $25 per virtual guest, with larger gifts and sponsorships welcomed from those who are able to give more.

Charles Vannoy (DNP, MBA, RN, FACHE), SNG’13, is a graduate of the Doctor of Nursing Practice (DNP) program at Rutgers School of Nursing. He is vice president and chief nursing officer at the Valley Hospital in Ridgewood, where he has held various leadership positions since joining the hospital in 1997. Prior to being named to his current post in July 2021, he was assistant vice president of women’s, children’s, and emergency services.

Vannoy has more than 20 years of experience leading transformative changes in nursing, hospital administration, patient care, and service delivery. His recent accomplishments include launching and managing a program to address the COVID-19 pandemic that provided vaccinations to more than 14,000 people in 60 days before giving way to a much larger off-site program. At Valley, his accomplishments also include the introduction of a patient- and family-centered model of care which has transformed the hospital from one that saw families as visitors, to one in which they are viewed as partners in care. He also spearheaded the launch of a hospital-wide, interactive patient education system. In addition to his DNP degree from Rutgers, he holds an MBA from Capella University and a BS in Nursing from Fairleigh Dickinson University.

Vannoy has served as an executive board member at the March of Dimes-March for Babies and at the Organization of Nurse Leaders. He is a fellow of the American College of Healthcare Executives, recipient of the Organization of Nurse Leaders (ONL) Divisional Leader Award, and recipient of the Bariatric Center Award for Excellence.

Marika Haranis (MSN, RN, APN), CNUR’10, NURG’13, earned two nursing degrees from the School of Nursing: her BS in Nursing in 2010 and her MS in Nursing in 2013, specializing in Family Nurse Practitioner. Her career focus is palliative care nursing. Since June 2020, she has served as system clinical director of palliative care services at Northern Virginia-based Inova Health System, where she leads the day-to-day palliative care operations at five Inova hospitals. Her prior positions include clinical director of palliative services at the University of Pittsburgh Medical Center where she coordinated the palliative program, helping it to nearly double in size and she also developed a grant-funded program that trained nurses as champions for end-of-life care.

Haranis also has served as chief clinical officer for the Hospice and Palliative Nursing Association (HPNA). She helped lead the development of online nursing education, a podcast, best-practice guides, and other initiatives to expand nurses’ access to expert information on palliative care. She continues to work with HPNA as a consultant and also as a national faculty member for the End-of-Life Nursing Education Consortium (ELNEC), where she teaches twice a year to nurses in any field looking to learn more about end-of-life care.

Dula Pacquiao (EdD, RN, CTN-A, TNS), an internationally renowned expert and influencer in transcultural nursing, is professor emerita at Rutgers School of Nursing, executive director of the Philippine Nurses Association of New Jersey Foundation, and an alumna of Rutgers University. She retired in 2015 from the School of Nursing where she served 10 years as a professor and held leadership roles including director of the Stanley Bergen Center for Multicultural Education, Research, and Practice and director of the urban health track of the PhD in Urban Systems program.

She has received several awards for research, leadership, and teaching including the Leininger Award for Transcultural Nursing Leadership, Medal of Honor from the University of the Philippines Nursing Alumni Association, and the Leadership in Professional and Allied Organizations Award. She was inducted into the Alumni Hall of Fame at Teachers’ College, Columbia University.

She earned her BS in Nursing from the University of the Philippines; her MA in Nursing Curriculum from Teachers College, Columbia University; and her EdD, from Rutgers.

Beverly Whipple (PhD, RN, FAAN), professor emerita and alumna of Rutgers School of Nursing, is an internationally known expert on women’s health and sexual physiology. A certified sexuality educator, sexuality counselor, and sex researcher, she is the co-author of the international best-seller, The G Spot and Other Discoveries About Human Sexuality, which has been translated into 23 languages. She has co-published five additional books, appeared on over 300 radio and TV programs, and has been featured in hundreds of magazines. She has delivered over 800 talks and keynote speeches, published over 200 research articles and book chapters, and received more than 115 awards from professional associations, research societies, and foundations. In 2013, a new scientific research center was named for her, “El Centro de Investigacion en Sexologia: Dr. Beverly Whipple,” in Puebla, Mexico. She is a Fellow of the Society for the Scientific Study of Sexuality and a Fellow of the American Academy of Nursing. For their 50th anniversary, New Scientist named her one of the 50 most influential scientists in the world (2006).

Whipple earned her BS in Nursing from Wagner College, where she is an alumni fellow and holds an honorary doctorate. She earned her MS in Counseling, MS in Nursing, and her PhD in Psychobiology from Rutgers University, which named her a Rutgers 250th Anniversary Fellow in 2016.