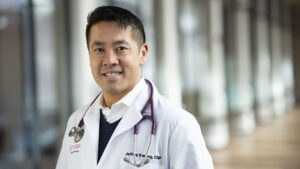 In 1986, when Jeffrey Kwong (DNP, MPH, AGPCNP-BC, FAANP, FAAN) was working as a volunteer at an HIV community organization in Northern California, the words “HIV” and “aging” were rarely spoken together in the same sentence. Back then, a diagnosis of the disease that disproportionately affected young gay men was almost always a death sentence.

Even in 1997, when Kwong received his nurse practitioner degree and began treating HIV as a clinician, it was still very much a young person’s disease, the number-one killer of Americans between the ages of 25 and 44. He couldn’t imagine then that he would one day become a specialist in HIV and aging.

Today, Kwong is a professor at Rutgers School of Nursing. His extensive expertise in HIV research, education, and clinical care led to his appointment, in February, as co-medical director of the American Academy of HIV Medicine’s national HIV and Aging Initiative. He is the first nurse to assume this role. The initiative, comprising renowned HIV specialists and gerontologists, works to provide the most up-to-date science and clinical guidance to practitioners around the globe.

For Kwong, the significance of the appointment boils down to one essential prospect: “With this position,” he says, “I’ll be providing an opportunity for patients to get the best care possible.”

A primary concern for his patients has always marked Kwong’s approach to HIV care. As a young gay man, he says, “I wanted to do something for my community and for the people I loved and considered members of my family.” As treatments for HIV evolved, many of Kwong’s patients began to do something that had been unthinkable three decades earlier: age.

But while older people with HIV suffered from many of the same chronic conditions as the aging non-HIV population, the HIV community was evincing those conditions at a significantly earlier age. Perhaps this happens, Kwong suggests, because of the low-level inflammation that occurs even in those with well-controlled HIV, as well as the effects of HIV medications.

In 2014 Kwong enrolled in the post-master’s gerontology program of the Hartford Institute for Geriatric Nursing at New York University, receiving certification in 2015.

The challenge faced by Kwong and other practitioners who treat aging patients with HIV is that the standards and risk calculators for the population as a whole tend to underestimate the risk of disease in people with HIV. “You have to use a lot of critical judgment,” he notes, “taking into account how long someone’s been living with HIV, what medications they’ve been on, and the presence of other chronic conditions.”

As a leader of the HIV and Aging Initiative, Kwong is in a position to help clinicians understand the best way to make those determinations and to optimally treat an aging HIV population. And he’s hopeful that new approaches to treating these patients will develop apace. He draws his optimism from the extraordinary advances he’s already seen in HIV care in general, including treatment with a single daily pill and, most recently, with a monthly injection.

“The science,” he says, “has been wonderful, and very surprising.”