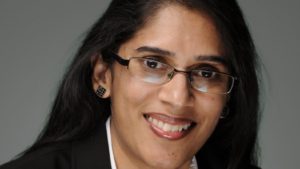 Rutgers School of Nursing doctoral students Luis Febus and Maya Joseph were recently named the 2018-2020 Jonas Scholars. Each scholar received a grant of $10,000 from Jonas Philanthropies, a leading national philanthropic funder of graduate nursing education. The amount is being matched by the school for an award total of $20,000 over the next two years.

In addition to financial assistance, the Scholars program provides leadership development and networking support to more than 200 current recipients and 1,000 alumni across the nation. Fulfilling its promise to invest “where it matters most,” Jonas Philanthropies supports “nursing scholars whose research and clinical foci specifically address our nation’s most urgent health care needs.”

Febus’ research centers on health care disparities among inner-city Hispanic populations as they relate to mental health. Born to Puerto Rican parents and raised in a traditionally Hispanic neighborhood in New York, Febus understands the challenges that Hispanic minority communities face while acculturating to the United States. “A major gap that exists within these marginalized communities is inequity in access to quality health care,” the second-year PhD student said. Following his PhD studies, Febus plans to pursue a research program that addresses the health care needs of disenfranchised populations.

Joseph, a second-year PhD student, is researching type 2 diabetes prevention in Asian Indian immigrants in the United States. “It was interesting to me that they carry the same risk of diabetes even after migrating to the United States where they get healthier living conditions and better medical care,” she said. Shocked by the scarcity of research in this area of health care, Joseph plans to partner with researchers and inform prevention programs that are tailored to the needs of this population.

Febus and Joseph join an impressive group of Rutgers nursing students who have received the Jonas Nurse Scholar award in the past. The 2016-2018 cohort includes four students pursuing their ­­­­PhD in Nursing degrees: