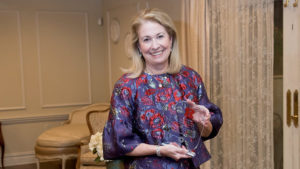 Rutgers alumna Judith M. Persichilli (BSN, MA, RN) was confirmed by the New Jersey Senate as the commissioner of the Department of Health on January 9, Governor Phil Murphy announced.

Persichilli, whose nomination was announced by Murphy in June 2019, had served as acting commissioner since August 2019. She is the first registered nurse to become the state’s health commissioner.

Murphy lauded Persichilli as a highly respected member of her field with a remarkable record of proven success. “I look forward to continuing our work together to ensure a stronger and fairer New Jersey for all,” he said.

She is a member of the Georgian Court Board of Trustees. Persichilli has also served on the board of directors of the New Jersey Health Care Quality Institute and the Audit and Compliance Committee of the Board of Bayada Nursing Agency. She was inducted into the New Jersey State Nurses Association Hall of Honor in 2006.