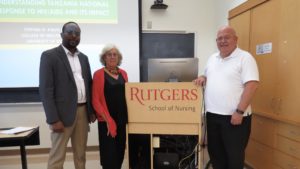 Just three years after Tanzania’s first reported case of HIV/AIDS in 1983, the nation faced a devastating plight: nearly each of its 31 regions began reporting cases of infection without signs of a near slowdown. For more than a million Tanzanians, survival would go on to take new meaning and form, leaving the nation to feel all too keenly the disruption of HIV/AIDS to its social and economic growth. Yet, much like the U.S., it wasn’t until 2000 when Tanzania declared HIV a national disaster, with its first national policy and strategy introduced shortly after. Despite both national and international responses making headway, HIV/AIDS remains a global epidemic, especially in Sub-Saharan Africa where Tanzania shares its borders with other affected nations.

Stephen Kibusi (PhD, MA, RNM), dean of the School of Nursing and Public Health at the University of Dodoma (UDOM), addressed Tanzania’s public health challenge at a recent seminar series co-hosted by Rutgers School of Nursing. Given ongoing research and programmatic efforts, Kibusi maintains the nation’s vision — to “free the country from the epidemic, producing a generation living without the fear of HIV/AIDS,” he said.

At this event titled “Experience of Tanzania in Addressing HIV/AIDS,” hosted in partnership with Rutgers School of Public Health and Rutgers Global Health Institute, Kibusi presented an in-depth trend analysis of key HIV/AIDS indicators from the National Tanzania Health Statistics. Taking nationally represented data from surveys conducted in 2001-2002, 2006-2007, and 2011-2012, his analysis breaks down the reported decrease in the nation’s HIV prevalence from 7% to 5.1% among those aged 15 to 49. Kibusi offered a stratified look at sub-populations such as rural and urban households and marital status, concluding that though some sub-groups have indeed changed over time, others have yet to exhibit any change at all, leaving a number of them, namely young women and youth, at high risk.

Kibusi’s visit is part of an ongoing partnership between Rutgers School of Nursing and UDOM’s School of Nursing and Public Health. Over the last four summers, Suzanne Willard (PhD, RN, APN-c, FAAN), associate dean of Global Health, has led cohorts of Rutgers nursing students to Dodoma, Tanzania, where they take a global health practicum course. “Students need to have a global understanding of their work,” Willard said. “Many of the challenges here in New Jersey are shared throughout the globe. Students need to be citizens of the world, not just New Jersey. It helps them become more understanding of humankind.”

This year’s cohort had the special opportunity to visit the Village of Hope, an orphanage for children affected by HIV/AIDS. There, students witnessed the importance of education in creating a de-stigmatized culture of acceptance. “I will never forget the smiles on the children’s faces at the Village of Hope,” said nursing student Courtnee Williams, who aspires to use her nursing career to help improve the health care system in African nations. “The children,” she continued, “hold a very special place in my heart. Their journeys in life are not going to be easy at all. They will be judged, looked upon as different, and rejected from the community. Until people are educated on HIV/AIDS, there will always be a division between people that have it and people that do not. This is why the Village of Hope is so special.”

Throughout Tanzania’s fight against HIV/AIDS, the nation’s health care system has experienced reforms that have set the country on a path of hope. Tanzania looks ahead to a future when its vision will be achieved — a country, according to Kibusi, free from the epidemic and living without threat.

Visit our program page for more information about our HIV Care specialization.